I needed to create a quick little quiltlet for the SAQA Spotlight auction. It needed to be 6" x 8" but only 4.5" x 6.5" will be revealed after it was matted.

This seemed like a great opportunity to start playing with backgrounds. This one clearly derives from Taylor's original painting but that's OK. I tend to bleaker subject matter and the little piece needs to be somewhat visually attractive for auction purposes.

This is entirely composed of hand-dyed fabrics from my friend Debbie Vandermeulen.


Posted by Christine Nielsen at 11:51 AM No comments:

I wanted to explore what would happen if the background was as simple as possible - one fabric with some basic straight line stitching.

Doodle from my iPad.

This went together very quickly. In the end I abandoned the starting image and created a new design. I was glad to take the step of moving away from a per-determined outcome. There is lots I like about the effect of a single background fabric but in the end I don't think it has any power to convey meaning.

I want to explore more interesting methods of creating backgrounds. I will let the background and the 'story' which develops as I work on it define the placement of the bars.
Posted by Christine Nielsen at 11:46 AM No comments:

Second in the series. These first few are just about doing the work. I am determined not to fuss over anything except getting them done.

Another doodle from my iPad. I thought it would a good idea to see if there was a difference when working with diagonals. I decided to include textured fabric to learn about how to apply it to the backing

Commercial cottons, fused to white acrylic felt. Mid-value fabric was textured with free motion quilting in a multicolor thread (King Tut) and the Pellon version of Texture Magic, then basted to the felt background. Bars fused to black acrylic felt and then fused to surface. Stitched with Sulky rayon. Faced.

This went together much more quickly than the first. I am developing a system for transferring my sketches to fabric quickly and precisely (in the event that precision will be needed down the line). I don't like the black acrylic felt quite as much as the wool/rayon - bars don't stand as proud of the surface - but the difference is minor and I'm probably the only one who would notice.

I chose to diminish the width of the bars compared to #1 - background becomes much more important.

The original drawing was done in this orientation. Fabric choices and the resulting suggested imagery can make a big difference to the final choice in terms of how to display these. 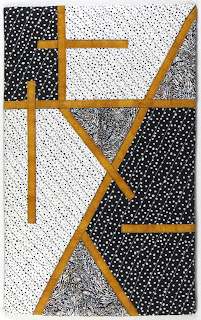 I want to experiment with the application of a very heavily textured fabric - one that may seriousl interfere with my ability to stitch through the piece.  I think I will also follow the path of reducing the number of fabrics in the background, probably to one. That might mean that I can increase the width of the bars so the foreground becomes the main player in the composition.

Posted by Christine Nielsen at 3:00 PM No comments:

First in the series. I chose a simple pattern from the many I have sketched in order to experiment with construction methods.

Why First few pieces will focus on how to construct similar work. Need to figure out best and/or fastest way to create a variety of backgrounds, including how to use fabric with extreme surface texture, overlay lines and use a variety of types of lines.WhatI selected an image at random from my iPad doodles. Fabric selection was deliberately matchy-matchy because I was more interested in construction than design. Starting with cotton before I branch out to fabrics which are more difficult to handle.HowBackground fabric fused (using WonderUnder because I have a bolt of the stuff) to white acrylic felt, then stitched. Cotton fused to black wool/rayon felt. Should have added fusible to back of felt but didn't before I cut it. Used Liquid Thread on back of felt. Fused bars down and stitched with a straight stitch (zipper foot, 8.4, 2.2) using Sulky rayon. Faced.ThoughtsLearned to quickly apply fusible. Liked fusing bars down before stitching, prevented wobble and creep. Will remember to add fusible to bars in the future.

Loved the #12 Sulky stitching on the big piece of hand-dye. The extra thickness makes a difference.

It intrigues me how often I like a different orientation than the one I had originally sketched.

Seems very safe but it is only the beginning. Must be patient and develop a process and skills.

Next
Try another one to streamline construction.

Experiment with either heavily textured fabric or ways to bleed background from one area to another.

Posted by Christine Nielsen at 10:14 AM No comments:

For almost my whole life my doodles have consisted of a set of intersecting lines which sometimes serve to contain a space and at other times end "in thin air". This is just one of hundreds on my iPad. 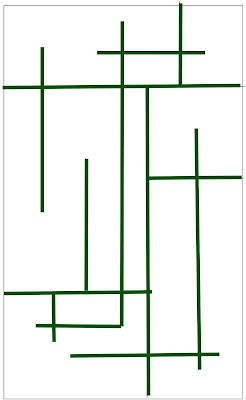 I am pretty sure that the origin of this motif is from a painting called New England Spring by C. Fayette Taylor. Taylor was a prominent engineering professor at MIT but turned to painting and sculpture in his later years.

My parents owned two paintings by Taylor, this one being the most representational. I don't know if he used this motif in other works because I can't find any more information about his painting  He was primarily known for his metal sculptures and there doesn't seem to be a catalogue of those either.

My mother gave me both paintings a few years ago and New England Spring hangs opposite my bed. Until recently I hadn't stopped to think about why the motif fascinates me. I now realize that it is because it can represent many of the topics that interest me, among them:

Secrets - I am constantly aware that everyone and every situation holds secrets which affect the outcome of events, even if they may never be revealed.

Layers - As above, I am interested in what lies beneath. I have previously done work where I excavated the pieces, discarding upper layers to find something underneath. The lines of the grid, made fatter, are the ground to be excavated.

Open-ended states - Sometimes there is a blurring of situations where one runs into another. Is it important to know where one thing ends and another starts?

Multi-facets - I live a life of many parts. It is a curse and a pleasure. I am interested in the impact on me and others of my split focus.

Interruption of pretty - The pretty could go on and on but the lines stop that progression. Good thing!

Networks, connections, fascia - Recently I have become interested in the physical links within our bodies. This grid plays into those interests.

Armour - I hide the real me behind a very effective armour. But there are holes in that armour and some people can see through.

Paths taken (and not) - My life and those of the people with whom I work is a story of choices made and not made.

There are an infinite number of ways to modify this motif. How do they change its meaning?
Quality of stroke
Thickness of stroke
Value of stroke
Colour of stroke
Repetition
Straight vs curved
Integration of straight and curved
Lines as shadows
Lines as gaps

I am undertaking a year long exploration of this motif. I will have the assistance of a mentor who I hope will keep me focused on both the work and the questions I want to answer. I intend to make a series of pieces which use the motif in some form. I expect that the first few pieces will help me streamline the production by answering questions about how best to create the backgrounds and apply the overlay of lines. Once I have sorted out those issues I  can move on to deeper work. To start, most of the pieces will be small (probably not longer than 18" on a side) but they will get bigger as the year goes on.

I have decided that I will not spend any effort on titles because they might steer me in the future. So the series will be 'Inspired by CFT, #1" etc.

I will use this blog to document each piece - why I made it, how I did it, what I learned and what questions it answered and/or generated. It will be a good reference for me. Writing often helps me sort out the problems with each piece and also provides a jumping off point for the next one.

If this intrigues you I suggest that you subscribe by email using the tool in the right sidebar. At times I will post several times a week but there will occasionally be long gaps because of my schedule or the need to keep something under wraps.